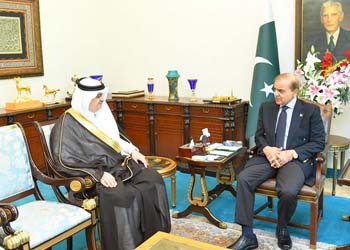 The Prime Minister conveyed his cordial greetings for the Custodian of the Two Holy Mosques His Majesty Salman Bin Abdulaziz Al-Saud, and His Royal Highness Crown Prince Muhammad Bin Salman.

The Prime Minister recalled his recent telephonic conversation with HRH the Crown Prince and stated that there was a shared desire to further strengthen bilateral cooperation in diverse fields. To sustain the upward trajectory in bilateral relations, the Prime Minister underscored the importance of regular bilateral exchanges at various levels.

The Prime Minister thanked the leadership and people of the Kingdom for their strong expression of support for the flood victims in Pakistan, including provision of relief assistance through establishing an air bridge between the Kingdom and Pakistan.

The Prime Minister also appreciated the important contribution of the Ambassador of Saudi Arabia in relief efforts, who personally visited flood-affected areas.NNI