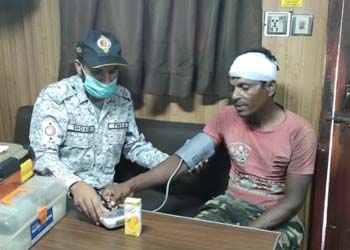 Giving details, the PMSA said its ship was patrolling in Eastern maritime region and found six Indian fishermen in water; a rescue operation was launched immediately and all crew members of the Indian fishing boat were safely recovered.

Later, it was reported that their boat sank as a result of an accident and they drifted towards Pakistani waters.

Later, the rescued fishermen were handed over to an Indian coast guard ship operating in the area. The humanitarian gesture of the PMSA ship was appreciated by the rescued fishermen as well as the Indian Coast Guard. PMSA has always been at the forefront in saving lives at sea without any distinctions; the Rescue of Indian fishermen is a manifestation of this resolve. NNI