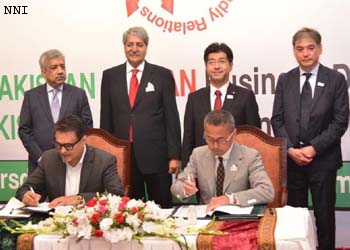 The Federal Minister for Commerce, and investment Syed Naveed Qamar inaugurated the Dialogue.

In his opening remarks during the plenary session, Mr. Qamar welcomed the leader of delegation of Japan, Mr. Ryuji Satomi, the Parliamentary Vice-Minister of Economy, Trade and Industry.

He stated that the Joint Dialogue is taking place on the occasion of 70th Anniversary of the establishment of diplomatic relations between Pakistan and Japan.

He said that it was a matter of satisfaction to see Japanese firms from diverse sectors like Automobiles, Information Technology, Electronics, Construction, Finance etc. visiting Pakistan.

Meanwhile, a MoU was also signed between Trade Development Authority of Pakistan (TDAP) and Japan External Trade Organization (JETRO) for cooperation in promotion of bilateral trade.

The plenary session was followed by the official talks between the two sides.

The two sides expressed satisfaction at the continued healthy pace of growth in the bilateral trade despite global disruption and challenges due to COVID pandemic.

Both sides agreed to continue discussions between the two countries to further enhance trade related cooperation and investment opportunities. NNI