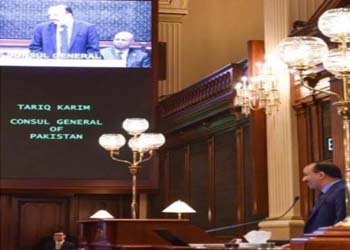 CHICAGO. (NNI): Pakistani Consul General in Chicago Tariq Karim Saturday emphasized Pakistan’s geo-strategic significance, its achievements and potential in his speech at the Illinois General Assembly at the State Capital in Springfield.
The Counsel General also spoke about the various dimensions of the Pakistan-US relations; Pakistan’s growing partnership with the State of Illinois; and the role of Pakistani Diaspora.
The Consul general stated that, despite various challenges and odds, Pakistan has achieved several milestones in the last 75 years.
He highlighted that Pakistan’s geographic location, its demographic dividend and market size, democratic orientation, rich human and natural resources and liberal investment policies have made Pakistan as an important business and investment destination in the world.
He also shared Pakistan’s success stories in various fields, including the rapid growth of thriving start-ups and tech ecosystem, expansion of infrastructure and industry, its fight against terrorism and handling the Covid-19 pandemic, empowerment of women and minorities.
The Consul General underlined that Pakistan has pursued a policy of peaceful neighborhood, with cordial relations with all neighbors, regional connectivity, and economic development. Drawing attention towards the plight of Kashmiris, he stated that a just and peaceful resolution of the J&K dispute in accordance with the wishes of its people could open an opportunity for regional cooperation and development.
He stressed the importance of longstanding relationship between Pakistan and the United States. He stated that the foundation of Pakistan-US strategic and economic partnership was laid shortly after the birth of Pakistan in 1947 which has served the interest of the two countries and contributed in making the world safer.
The Consul General also shared with the Chamber the success story of eighty US enterprises and corporations doing business in Pakistan, the expanding Pakistan-US trade as well as investment opportunities. He stated that the prospects of Pakistan-US relations were bright and there was an enormous potential between the two countries to further expand their ties in diverse fields.
He highlighted Pakistan’s growing partnership with Illinois and other Midwestern States, as reflected by rapidly increasing trade, investment and people- to- people interactions. He stated that there was an enormous potential between Pakistan and the state of Illinois-which has a GDP of around $1 trillion-to further enhance ties in trade and investment, technology, health, energy, agriculture, and education.
Consul General Tariq Karim underlined the contribution of Pakistani-American community in the socio-economic development of the two countries and their bridge building role. He shared the achievements made by entrepreneurs, innovators, and professionals from Pakistani Diaspora in Illinois and their contribution in the welfare of the State.
The Consul General also highlighted the unprecedented scale of devastation caused by the recent climate-induced catastrophic floods in Pakistan. He emphasized the need for the international community to support Pakistan tackle this calamity, especially in view of the fact that Pakistan was bearing the brunt of climate change despite its negligible contribution to global carbon emission.
Separately, the Consul General met Speaker of the Illinois House of Representatives Mr. Emanuel “Chris” Welch and Minority Leader in the House Mr. Jim Durkin. He also interacted with a large number of representatives of the Illinois General Assembly. During these meetings, they discussed bilateral relations, economic partnership and the role of lawmakers in promoting friendship and understanding. NNI