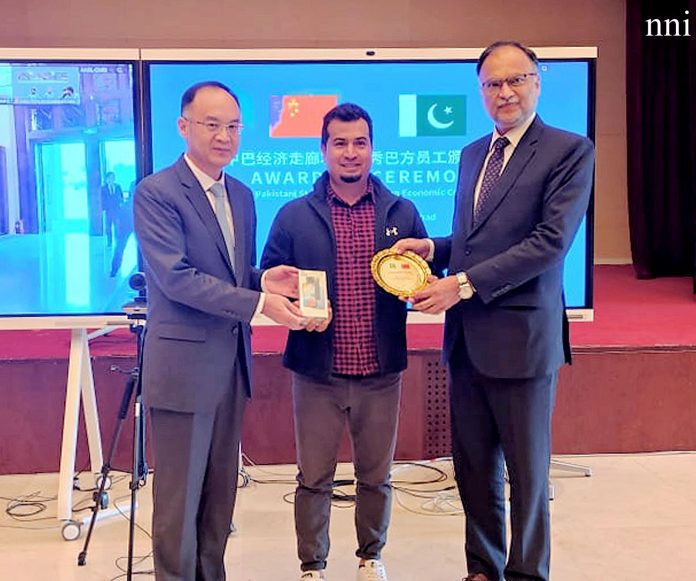 Addressing the occasion, the Ambassador wished a happy New Year to everyone. “I am very glad to attend the Award Ceremony 2021 for Outstanding Pakistani Staff of the CPEC Projects 2022,” he said.

He added that it was also a year witnessed the deepening of all-round cooperation between the two countries. In particular, against the challenge of global economic downturn and historical floods in Pakistan, the CPEC projects have made sound achievement.

He also expressed his heartfelt thanks to Planning Minister Ahsan Iqbal, for all the efforts and contributions he and his team have made to CPEC! He also thanked Pan Jiang and NDRC colleagues, for their input and guidance to this landmark cooperation.

“My thanks also goes to the Chinese friends, Pakistani brothers and sisters, whoever works for the smooth construction and operation of CPEC projects. And thank All Pakistan Chinese Enterprises Association for the positive role it plays. I shall also thank our media friends and think tank experts for attendance. It is important to pool all our resources and strength together, and brand the CPEC in a more visible way, Ambassador Nong Rong remarked.

During this year, he said, the CPEC has always been the highlight of bilateral relations between the two countries. On November 2, President Xi Jinping met with Prime Minister Shehbaz Sharif of Pakistan during his official visit to China.

The Chinese Ambassador said that both the sides are committed to make full use of the JCC of the CPEC, advance CPEC with greater efficiency, and make CPEC an exemplar of high-quality Belt and Road cooperation. Before the visit, the 11th JCC meeting was successfully held, setting the path for the future cooperation, Water Resource Management and Climate Change have been added to the social-economic JWG.

The Chinese envoy added that a series of good news are coming from different sectors under the CPEC umbrella. The China-aided Eastbay Expressway of Gwadar port has began operation since June, enhancing connectivity of the port, which is now transporting two hundred thousand ton of fertilizer. Karot Hydropower started commercial operation in June as well, which provides cheap and clean electricity, and can reduce 3.5 million metric tons of carbon emissions annually. The TEL and Nova power plants in Thar also started operation with the local coal.

Ambassador Nong Rong said that the Shanghai Electric Thar coal-based power plant has been connected to the national grid. Six model farms under Pakistan- China Red Chilli Contract Farming Project are achieving a harvest in Punjab and Sindh Province, with an estimated yield of 700 tons of dried chilly. This is just a portray of the great potential of agricultural cooperation between our two countries.

In fact, Pakistan’s trade surplus of agricultural products for the year of 2021 enjoyed an increase of 13 times. This year is expected to exceed a record high of US$ 1 billion. So far, CPEC has created 192,000 jobs, 6000MW of power supply, 510 km of highway and 886 km of transmission line, which laid a solid foundation for Pakistan’s socio-economic development, he added.

Ambassador Nong Rong said that the achievements of the CPEC are not possible without joint efforts of staffs from both China and Pakistan. Among the 34 outstanding Pakistani staffs, some are engineers, who keep the boilers and other equipment in good condition; Some of are from administrative sector, who implement the Covid SOPs in a prudent manner; Some are from financing sector, who help the project to attract investment.

“Each of you has a good story. You are not only the constructors and participants of the CPEC, but also the witnesses and promoters of a brilliant history,” he said.

Recently, China adjusted its COVID prevention and control policies, which include the removal of measures to control the number of international flights and restoration of people-to-people exchanges for business and study. These will further promote the exchange of people, and facilitate the investments between China and Pakistan. More Pakistani staff can take training programs in China. More students can go to China for further study, and come back to join the CPEC projects, passing on the friendship between our two countries, he added.

“On behalf of the Chinese Embassy in Pakistan, I would take this occasion to extend my warm congratulations to the winners of the award for outstanding Pakistani staff! The CPEC, as the pilot project of BRI and China-Pakistan cooperation in the new era, will always provides a broad stage for people to display their talents and realize personal values. It is hoped that the Chinese and Pakistani staff will cherish the opportunity, contribute to the construction of the CPEC with practical actions, and continue to consolidate the iron friendship between China and Pakistan,” he concluded. NNI