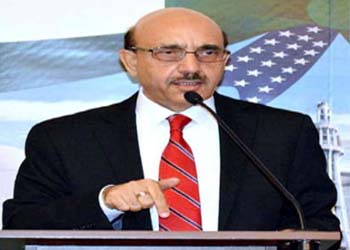 Washington, Oct 4 (NNI):“Millions of women and children displaced by the recent floods are undergoing an inexplicable trauma of life,” Pak Ambassador to the United States Masood Khan has said.

“Forced to face all kinds of hardships in makeshift shelter homes and experiencing untold miseries of haplessness, these climate refugees need urgent attention and long-term commitment of the international community,” he continued.

The Ambassador made these remarks while addressing a fund-raiser event organized by Refugee Girls Worldwide (RGW), a non-profit charitable organization working for the betterment of refugees girls in Turkey, Palestine, Ukraine, Pakistan and Canada.

RGW is supporting 3000 refugees monthly through provision of food, education and relief programs. It was informed that 1050 girls were getting monthly support in education, 3000 refugees were being provided food boxes and 1000 mothers were getting coaching for self-care and support with their newborn’s health.

The event was attended by prominent members of Pakistani diaspora, philanthropists, and officials of the State Department and Embassy of Pakistan.

Appreciating the efforts for RGW for girls, being the most vulnerable section of society especially during calamities, Ambassador Khan observed that our empathy towards marginalized sections defined our character as civilized and humane society.

Masood Khan highlighted that more than 70% of 33 million flood affected population consisted of women and children. 6,00,000 were pregnant women with 2,000 women giving birth everyday in an unsafe and unhygienic conditions. He said that gastrointestinal infections and other waterborne diseases including dengue fever and malaria had created a “disaster within a disaster.”

While thanking US government, civil society, philanthropists and especially Pak-American community for their generosity during rescue and relief operations, the Ambassador called upon international community for long-term commitment for reconstruction and rehabilitation phase.

Mr. Christopher Jester of US State Department, speaking on the occasion highlighted US assistance for the flood affectess and said that innovative ways were required to help the flood affectees enabling them to reconstruct and rehabilitate.

Ms. Zarmina Yusufi and Faisal Yousuf briefed the participants about various activities of the organization.

The Ambassador appreciated Mr. Sufiyan Yusufi and office holders of RGW for their untiring efforts for climate refugees of Pakistan.